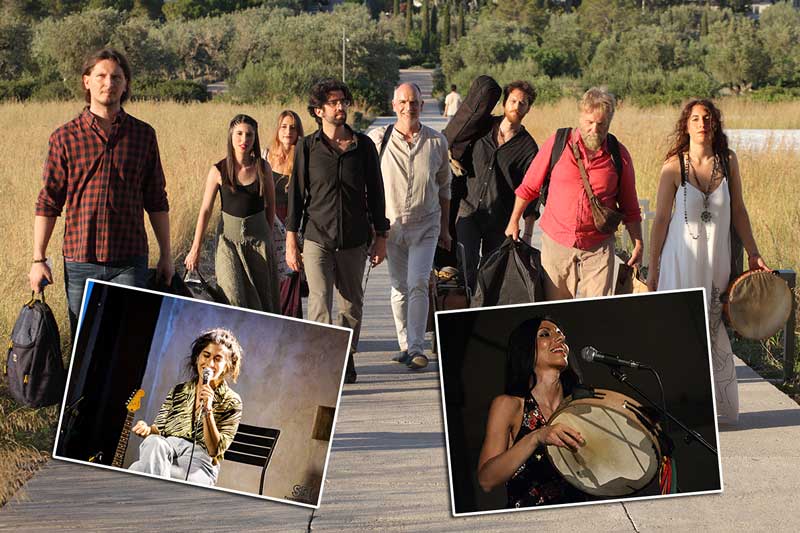 Encardia in collaboration with Anna Cinzia Villani and Claudia Giannotta present traditional songs in Grico, uniquely performed by themselves and their guests from the Salento Valley. Traditional rhythms and choreographies from the Italian South are combined with contemporary music, new songs and covers, always influenced by the musical tradition of this special region of Italy.

Encardia is a unique music collective created in 2003 by Kostas Konstantatos and is influenced by the musical tradition and culture of the Greek speaking areas of the Italian South, as well as the whole of the Mediterranean region. Up to now Encardia has performed about 3000 times all over Greece and Europe, released 7 digital albums and created an award winning documentary (Thessaloniki Festival 2012) regarding their relationship with the music and the communities of the Greek speaking villages of the Italian South.

Anna Cinzia Villani and Claudia Giannotta are two musicians who grew up amidst the musical culture of the Greek speaking communities of Apulia in the Italian South. They had the chance to learn from legends such as Giovanni Avantaggiato, Uccio Aloisi, Ghetonia and many more. Till today they are still searching and recording everything the older generations remember in those areas. Their relationship with Encardia started in 2008 at the Notte della Taranta festival in the Greek speaking village of Melpignano and since then they closely follow each other’s progress while collaborating in many musical gatherings in Salento.