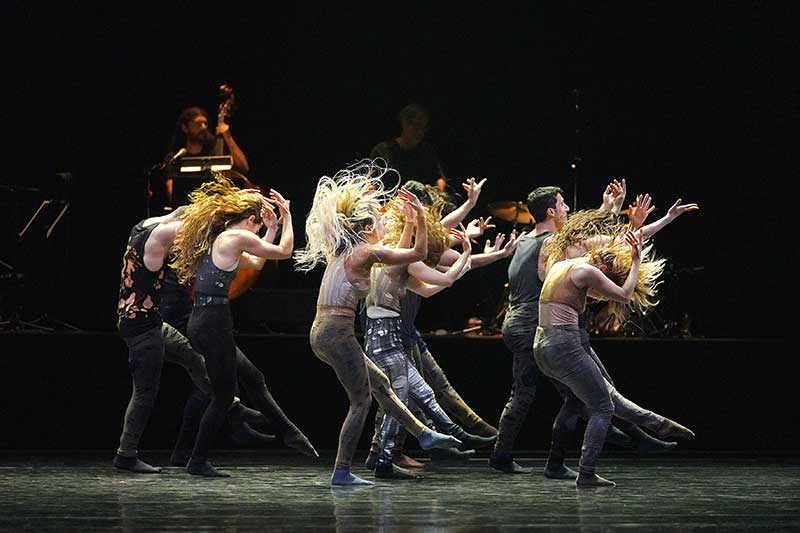 Sálema* is a struggle with time, immobility and the actual moment. It is where tradition encounters modernism, plurality meets abstraction and the light faces darkness, as dancers and musicians couple in a bizarre game by unearthing memories and feelings. The choreography leads the way for musicians and the audience to dive into a mystical abstract journey starting from Crete. The music renounces itself to give way and highlight the movement, and the interpretation of the dance image.

Salema Revisited, the new creation by the international Greek choreographer Antonis Foniadakis wants to honor the music and the dances of his birthplace, Crete. The Cretan dances are an inseparable part of the social life of the island and there are many variations from place to place and from one person to the next. In that context Foniadakis feels the need to offer his own perspective in terms of how tradition may exist and interact with other forms of expression, like contemporary dance, without threatening or offending the existing condition but rather in an attempt of enriching and promoting tradition to a wider audience with a sense of respect and pride.

There are twenty five types of dance in the dance heritage of Crete, not known to the whole of the island but thriving in specific areas. Some examples are ‘yitsikia sousta’, ‘glykomilitsa’, ‘rodo’, ‘fterotos syrtos’, ‘koytsabadianos’, ‘trizalis o apanomeritis’, ‘mikro mikraki’, ‘brimianos or priniotis’, ‘agkaliastos’, ‘xenobasaris’, ‘zerbodexos’, as well as many types of slow and jumpy dances. In Salema Revisited the choreographer does not attempt to record each and every one of them ; besides that was never his intention. What he wishes is to interpret with his own personal style the valiance, the beauty, the lyricism and the pain of the Cretan soul.

And above all he wishes to depict the force of the Cretans dancing ‘pentozali’ (a ten-step dance, alluding to the 10th of October 1769, when the Sfakians decided to start a revolution against the Ottomans). Accordingly the dance is accompanied by a musical piece of twelve phrases in honour of the twelve pioneers of the revolution. By focusing on the five most widespread dances, ‘sousta’, ‘maleviziotis’, ‘syrtos’ or ‘chaniotis’, ‘pentozali’, and by adding a selection of ‘rizitika’ songs, Foniadakis creates a colourful and multiform spectrum of rhythms and melodies to direct the flow of the performance. By combining the principles and the motifs of traditional dances with his multi-year experience, both as a dancer of contemporary dance and as a choreographer having created his own personal dance identity (developed slowly and steadily during these two last decades with performances and Dance Festivals worldwide) the audience will make a journey into passion, sweetness, melody and mysticism, stemming from Cretan music.
*[noun deriving from the ancient Greek verb σαλεύω [saleyo], meaning to sway ; figuratively it means to go mad]

Βorn in Ierapetra, in the south of Crete, Andonis Foniadakis started dancing as a child and then pursued dance studies in Athens at the National School of Dance and later abroad on scholarship. The very first steps of his career were dancing as a member of the Maurice Bejart group, and soon he began choreographing on commission for the biggest theaters in the world. As a guest choreographer, he has worked with leading dance ensembles and artistic organizations, such as the Lyon Opera Ballet, the Martha Graham Dance Company, the Aterballetto in Milan, the Ballets Jazz de Montréal, and the Ballet du Grand Théâtre de Genève. He also served as director of the Greek National Opera’s ballet. He worked as movement coordinator in Darren Aronofsky’s film Noah, received the Danza e Danza award for best choreographer in 2012 in Italy for Les Noces, and in 2018 he won the award for best choreography from the Greek Association of Music and Theater Critics for Galaxy, which he created on commission for the National Theater of Greece and the Greek National Opera.