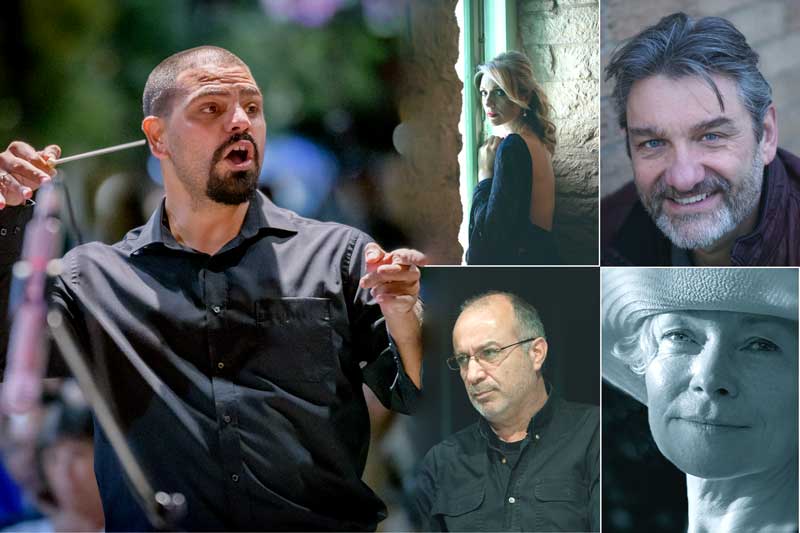 Three legendary heroines of the ancient Greek drama (Medea, Antigone and Hecuba) are transported in a contemporary context and submit their personal testimony in front of a present-day man who is investigating and struggling to understand their personal drama and choices, the dilemmas they faced, and the possible guilt each one of them carries.

Directorial note
A man, a lowly civil servant, is tasked with interviewing three great heroines from the past to see if the modern regime can find a candidate to forgive. On the National day of Forgiveness, a tyrannical leader cynically needs a photo opportunity to make him look good. The day does not, however, go as expected. Through the narration of just one story, this work evokes the ancient struggle between the archetypal male and female energies, and how one has so far dominated the other. How does this imbalance dictate the fate of individuals, their families, the decisions of our governments, and ultimately our own future?
Dominance or equality? Perhaps, even, war or peace?

Vasos Argyridis
Ηe studied composition and orchestration at the prestigious Moscow Conservatory. His artistic output includes music for the theatre, cinema, ballet and opera. He has worked with numerous renowned performers in Cyprus, Greece and worldwide.

Tim Welton
He began his career as an actor, but since 2001, he has concentrated on his work as a director, dramaturg and writer. He has collaborated with prestigious theatre companies in the UK.

Maxine Braham
She works internationally as director and choreographer in opera and theatre. Her work features in many award-winning productions. Recently she revived Billy Budd at The Bolshoi, which was awarded the Golden Mask Best Opera Production 2018.

Katerina Mina
The prize-winning soprano was born in Cyprus and is currently based in London. She studied at the Guildhall School of Music & Drama. She has appeared in concert venues worldwide performing an extensive and contrasting repertoire.

Paris Xanthou
He is a graduate of Lancaster University in 2009 with a Bachelor in Music and Master in Conducting. Over the years, he gained significant experience working with different musical groups (from symphony to jazz orchestra).
Since 2015 he is the conductor and artistic director of the Mesa Geitonia wind Orchestra.